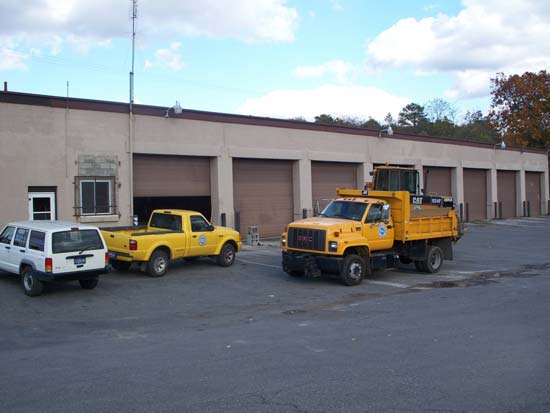 The Department is vital to the Borough of Berwick because through its work, the Borough is able to present itself as a beautiful place to live and play to visitors. It also allows the citizens to take pride in their community.

Some of the Services Provided by the Public Works Department

Approximately four weeks are utilized in October and November to pick up the residents’ leaves and brush, which must be left at the curb. We also pick up in the Spring for Christmas Trees and small brush.  The Borough also has a drop off site at the Test Track for small brush, leaves, and grass clippings.

The Public Works Department helps with preparations of numerous Borough and non-Borough event set ups such as Carnivals, 4th of July, Fireworks, blocking the streets for block parties, concerts, Kids Night, and many other events throughout the Borough.

The Public Works Department spends a great deal of time mowing the seven parks in the Borough.  In addition, there are several other properties in the Borough in which the Department takes care of.  The Department also spends a lot of time landscaping different areas of the town, beautifying the parks, City Hall, and the Downtown.

Berwick has four neighborhood Parks (Sponslors, Arbor Street, Louis Stevens, and Vine Street), a Downtown Park (Saint Charles), and two of the most beautiful parks in the area (Ber-Vaughn and Test Track).

The Department is also responsible for the signs throughout the Borough limits. This includes signs that are missing, damaged, or have graffiti on them. If you see such signs, please call the City Hall at 570-752-2723.

There are several snow removal duties that are performed: snow removal from the Borough, maintain sidewalks, and hauling snow as needed from uptown areas and parking lots. A list of the equipment used in snow plowing and removal include 5-ton trucks, a pick-up trucks, a front end loader, a Backhoe, and a Skid Steer. All trucks are equipped with plows and salt spreaders.

Dumpster Day, (Has been discontinued due to the cost)

The Borough had its 1st ever Dumpster Day on May 31, 2009 at the Test Track.  The Public Works Department volunteered their day to ensure that the more than 300 cars that arrived were safely and efficiently unloaded.  Residents were very thankful for this opportunity.

The Department is also responsible for the signs throughout the Borough limits. This includes signs that are missing, damaged, or have graffiti on them. If you see such signs, please call the City Hall at 570-752-2723.

There are over 60 miles of Borough maintained streets that the Public Works Department attempts to keep in the very best condition, despite a challenge in funding.  Potholes are patched as quickly as possible when found. If you know of a pothole that needs patched, call the City Hall at 570-752-2723.   Leave a message with the Receptionist and we will pass it on.

The Department tries to maintain the highest level of safety for the residents with the painting of curbs, crosswalks, and stop bars, which is done on an annual basis during the Summer months.

This is done throughout the year, although primarily in the summer.  All residents are to follow the posted signage throughout the Borough in regards to parking restrictions.

There are several hundred storm water catch basins and drywells in which the Borough maintains.  The Department tries to keep each of these free and clear of debris.  If you see a blocked catch basin, please contact City Hall at 570-752-2723.